The following technologies have been tested and verified to work with SP1:

I just found Google Base (http://base.google.com/base), this is a web where you can index your websites by category (jobs, products, hotels, profiles, etc.). It is any steps to the Web 3.0 that Google, in silent, are retaking order information.

What do you think? Is Google prepairing a big change in his search engine?

These videos are about bookmarking, history and mobile features.

Bookmarking and History Concept Video from Aza Raskin on Vimeo.

Mozilla Labs have release the fourth part of Aurora.

Aurora is a concept video presenting one possible future user experience for the Web, created by Adaptive Path as part of the Mozilla Labs concept browser series. Aurora explores new ways people could interact with the Web in the future based on projected technological trends and real-world scenarios.

The Part 4 is coming and you can subscribe to their blog feed:

This morning, we could read a big header, «And Microsoft killed Windows», on the front page of the technology section of a online newspaper, «El confidencial«. You can read the new here:

A example is Singularity (http://www.codeplex.com/singularity), some features are very similar.

Both are based on no-native-code applications. But this could finish in monopoly complaints. But I think… Isn’t Apple doing the same with his iPhone? I think so… Because, if you want to develop an iPhone application, you’ve to use his SDK… I think that it’s the same.

What do you think about? Is the Windows death? Only a research more? Or what? 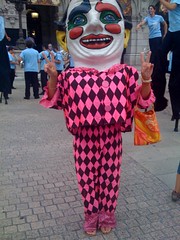 Google just released a new service. Someone said that the Youtube purchase was a mistake ‘cause Google didn’t know how earn money with it.

Now, Adsense and Youtube have mixed to make video ads. The result, you can see on the top of this page.

I think that it’s interesting so these ads are striking and they combine the traditional Google ads with multimedia spots.

Will be this a new success by Google?