In this tutorial we will learn how to create a new material with custom rendering to use on any Wave Engine game. 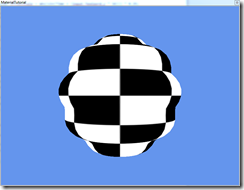 This tutorial assumes that the reader has experience with HLSL and GLSL shader programming.

Start by creating a new Wave Engine game project using Wave Visual Editor. Add an entity that contains a test shape to the scene (a simple sphere in this case); this way, we will be able to see how our new material behaves when we implement it:

We need to add the “DefaultTexture.png” file into your Assets folder. 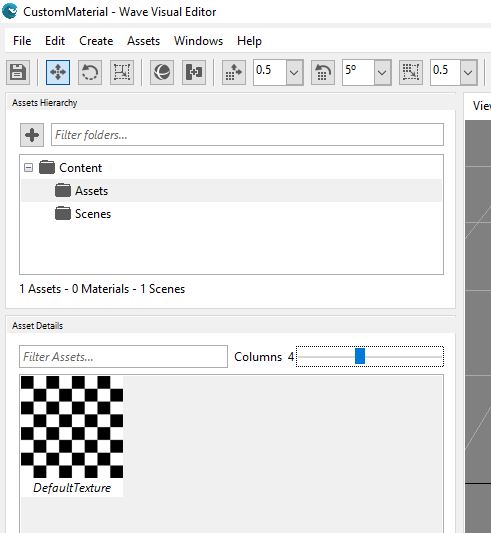 You can use any texture you want, we have used this: 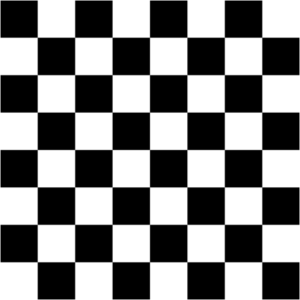 We have purposely created the sphere with a larger tessellation because in the sample shader we are going to perform a displacement transformation and without enough vertices it would look ugly.

Add a new class to your Game project called MyMaterial and make it inherit from WaveEngine.Framework.Graphics.Material. You will notice that Visual Studio warns you that the class must implement CurrentTechnique() method. These members, along with SetParameters(), are mandatory for each custom material and we will explain later what each one does.

We will start by creating a static array of ShaderTechnique objects. Inside each of them, we will store the parameters that the adapter will need to create the internal shader objects: the technique name, the vertex and pixel shader file names and a VertexFormat with the same layout of the input structure of the vertex shader.

In the snippet code we are creating a single technique called “MyMaterialTechnique” that uses the VertexPositionNormalTexture vertex format (each vertice will have a Position, Normal and Texture coordinates).

This way, when we need to initialize each technique, we will have all of its properties already stored to be able to easily access them.

We need to create a structure that will hold all the parameters accessed by the shader. Since it is directly mapped to a buffer, we need to specify its StructLayout as LayoutKind.Sequential; and due to technical limitations of DirectX, it must have a size multiple of 16 bytes (although the total size of the contained members can be less than that). Then, declare a private member variable that will hold an instance of the struct containing the parameters.

Since this sample material shows how texture mapping is done, we are going to need a property that stores a handle to an existing Texture object. Then, there are two ways to construct the material with the specified texture:

We are going to illustrate the second method, so add a string field and a Texture property:

We will show later how to initialize them.

Remember that CurrentTechnique field that was mentioned previously? It is a read-only field that returns the name of the shader’s technique that should be used when drawing depending on how the material is configured (Is lighting enabled? Should I draw using a texture?). Since this sample material only has one technique, this will be pretty straightforward:

Laying out the constructor

The constructor of the custom material takes care of initializing the default values of the material. The only requirements that you must always meet is assigning the private instance of the struct containing the parameters to the Parameters property. This is done so DirectX can properly map the structure’s layout to its internal buffers when creating the shader object. After this, you can safely call InitializeTechniques() passing the array of ShaderTechnique previously defined as the only parameter:

The function Initialize(…) takes care of initializing any members that couldn’t be done in the constructor; for example, Texture assets need to be loaded into an AssetsContainer to properly manage their lifetime. We are going to load here the texture that is needed for our shader:

Passing parameters to the shader

The SetParameters(…) method passes any necessary data to the shader. You must perform these actions in the specified order:

We need a shader to use our new material. We need to write the shader in two languages: HLSL (DirectX platform) and GLSL (OpenGL platform) if we want cross platform support.

Now that we have all the code to use our material inside Wave, we must write the shaders that will be called. We will start with the DirectX one.

We start by adding a folder with the name “Shaders” to the project that contains the material class (MyMaterial.cs). Inside this directory, we create one called “HLSL” and another called “GLSL”. Both directories will contain as many folders as materials we are creating, with the same name as the material’s class.

Important: The “Shaders”, “HLSL” and “GLSL” names are mandatory to allow Wave to find the material shaders.

Inside the HLSL folder, create a new .fx and name it MyMaterial.fx. This file will contain the shader source code (DirectX). This file is only used as an intermediate step because Wave needs the shader in binary form. However, with GLSL it is not necessary to compile to binary (OpenGL).

Start by adding the following code to MyMaterial.fx file:

Important: This buffer is mandatory to all shaders as it contains the matrices automatically mapped by Wave.

If you need additional parameters, you can pass them on the Parameters buffer.

This is the buffer that maps the custom parameters passed to the shader. Remember to lay them in the appropriate order and use the packoffset directive as needed.

Remember the SetParameters() method in MyMaterial class, where we wrote this sentence at the end “this.graphicsDevice.SetTexture(this.DiffuseMap, 0);“. With this sentence we are indicating that we will use the slot “0” to pass the texture to the shader.

Now we will create the Vertext Shaders Input and Output structures:

Check that the vertex shader input structure matches the vertex format you specified on the shader technique declaration – in this case, VertexPositionNormalTexture:

Now, we will proceed to write the vertex and pixel shader functions. The vertex shader will apply a simple sine deformation based on the Time parameter passed, and the pixel shader will sample from the texture and map it to the surface:

Since HLSL shaders need to be compiled, we are going to use the fxc.exe tool for this:

Now, remember that you must compile the shaders using the shader model 4.0 – DirectX 9.1 level target profile so the same shader can be used across Windows, and Universal Windows Platform builds:

Add the output files to the HLSL/MyMaterial directory of your project and remember to set the Build Action as Embedded Resource (it is necessary on all platforms). 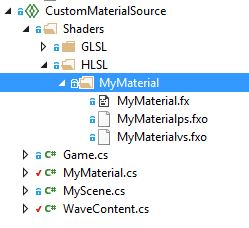 Now try launching your project and you will see the result if there are no errors:

Now, it’s time to add the shader for OpenGL platforms. We must translate the HLSL code to GLSL.

Create the vertex file MyMaterialvs.vert and add this code:

And now, create the fragment file MyMaterialps.frag with this code:

Note that, since OpenGL doesn’t have support for variable buffers right now, the parameters of the shader are specified as uniform variables and the format of the vertex buffer as attributes. Apart from that, the shader is very similar to the one made in HLSL. Because of this, we must follow some naming conventions in your GLSL code:

Remember to add them to your solution under /Shaders/GLSL/MyMaterial/ and set the Build Action as Embedded Resource. In this case, there is NO need to compile the shader files as we did with HLSL: 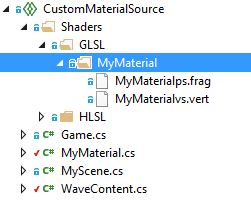 Now, create an Android profile (here you can see a tutorial) and run it. In case there are any errors compiling the new shaders, they will be written on the Output window of Visual Studio. 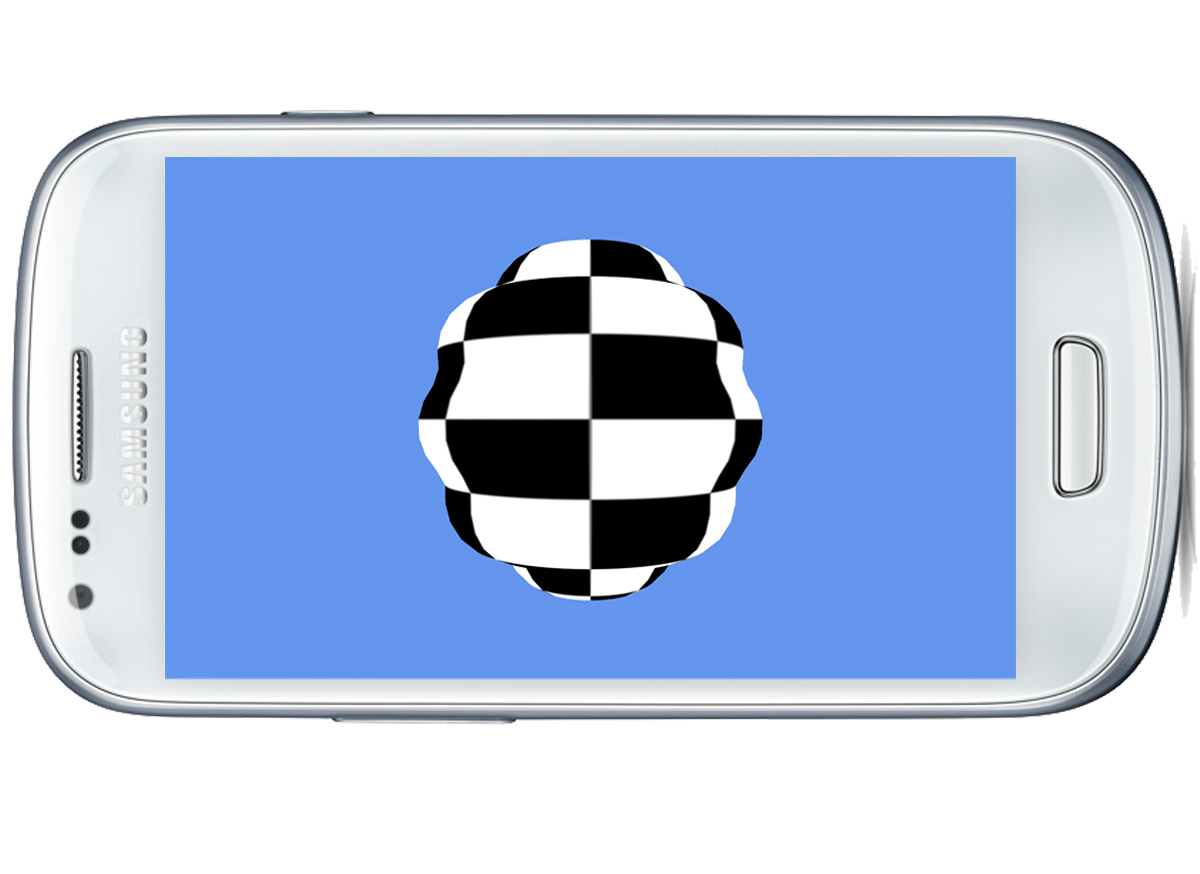 You can get the full code here