In Wave Engine 2.3.1 we have started to use Protobuf-NET as the default serializer in all game description files (scenes, prefabs, materials, etc…).

Protobuf-NET is a contract based serializer for .NET code, that happens to write data in the “protocol buffers” serialization format engineered by Google.

The inclusion of Protobuf-NET gives us the following advantages:

DataContract serializer (xml files) is still being used as the default serializer in Wave Visual Editor. This is useful to inspect scenes or upload your game project in a Version Control System (Git for example).

Protobuf-NET serializer is only used when our project is compiled and run outside of Wave Editor.

In order to avoid serialization problems using Protobuf-NET, we encourage you to avoid this following scenarios in your Component code.

Initialize Field and Properties inside the DefaultValues method

Fields can only be initialized inside the DefaultValues method (it will work in Protobuf, but not in DataContract)

This will not cause an error. But different behavior between DataContract and Protobuf can be noticed.

Protobuf handles interfaces as base classes, so [DataMember] attribute cannot be used with the implemented interface and the base class at the same time. 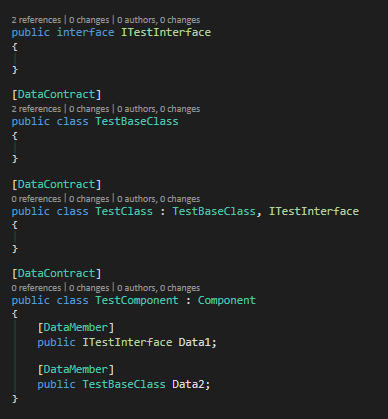 Protobuf-NET is now the default WaveEngine serializer, but you can revert this situation and turn back to the old DataContract serializer.